Degenerative joint diseases, such as osteoarthritis, represent an increasingly serious problem for society, not only in elderly patients. Damage to tissue and its progressive degradation are a natural result of the ageing process, but other risk factors for the disease include lack of exercise, sedentary lifestyle, unhealthy diet and obesity. Because of its special structure, cartilage can regenerate only to a small extent. Despite significant advances in medicine, still the gold standard in severe osteoarthritis remains the total joint replacement with implant. 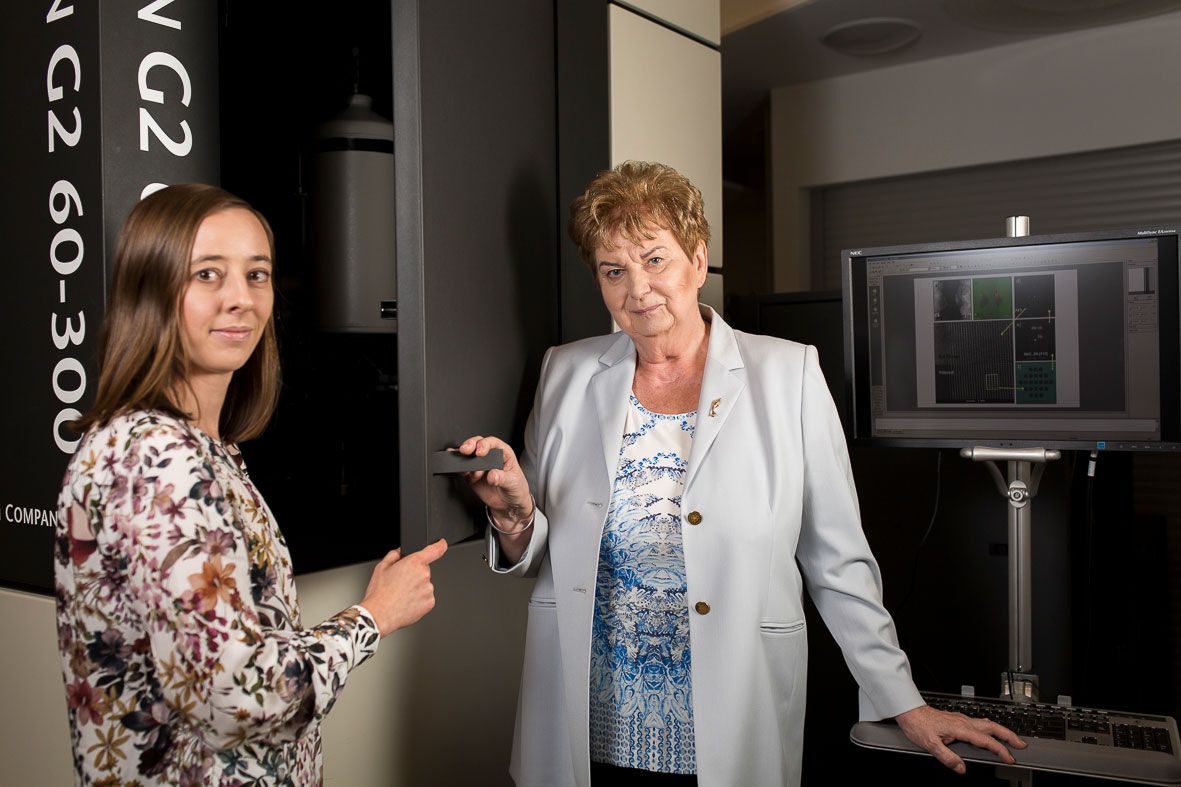 Prof. Dr hab. Aleksandra Czyrska-Filemonowicz and mgr inż. Joanna Karbowniczek with Titan Cubed G2 60-300 microscope (photo by Michał Łepecki) The primary objective of the research project was to develop innovative biomaterials (such as bioactive composite coatings and polymer nanofibre scaffolds) designed to significantly improve the treatment of bone loss and degenerative bone and cartilage lesions. This was achieved through interdisciplinary research in cutting-edge materials science and stem cell-based tissue engineering. Detailed project objectives included producing of novel biomaterials followed by detailed qualitative and quantitative characterization of their micro- and nanostructure as well as their micromechanical properties. Additionally coatings adhesion strength and surface topography were examined; finally their biocompatibility was studied. The project postulated that a microporous composite coating, like PEEK/Bioglass (fabricated through electrophoretic deposition), or TiO2/Ca-P and TiO2/HAp (produced by plasma electrolytic oxidation), would improve the quality of the interface between titanium alloys and bone tissue. To test this hypothesis, basic research was conducted to determine the impact of the micro- and nanostructure, phase composition and porosity of surface-modified biomaterials on their bioactivity and biocompatibility.

Titanium alloys are the most frequently used materials in implant elements that come into direct contact with bone tissue, because of their high corrosion resistance, excellent mechanical properties, as well as low density. In addition, titanium alloys often undergo surface modification in order to facilitate post-surgery implant stabilization. The very first results of our research on surface-modified titanium implants showed a pressing need to expand the scope of the project, which found its reflection in a PhD dissertation prepared by Joanna Karbowniczek, MSc. Its goal was to design, produce and comprehensively characterize coatings used to improve the bioactivity and biocompatibility of titanium alloys. The coatings were produced through micro-arc oxidation (MAO) and electrophoretic deposition; different parameters of these two processes were tested. Optimization of the MAO process parameters allowed to obtain coatings with high surface roughness, porosity, good adhesion strength and outer layer composed of crystalline hydroxyapatite. During in vitro tests good bioactivity and biocompatibility of the coatings was confirmed. Their properties were studied using advanced techniques of microscopy, spectroscopy, and electron tomography. The use of the latest-generation analytical electron microscope (S)TEM FEI Titan Cubed 60-300 and its unique equipment, available at the International Centre of Electron Microscopy for Materials Science (IC-EM), allowed the cutting-edge methods of electron microscopy to be harnessed for the study of the micro- and nanostructure of biomaterials down to the hitherto inaccessible atomic scale. In addition, the project conducted a pioneering 3D visualisation study of the interface between the cells and the coating with the use of a focused-ion beam (FIB) scanning electron microscope.

Interdisciplinary research, combined with the latest achievements in various disciplines (such as materials science, biotechnology, tissue engineering), cutting-edge technologies (fabrication of coatings and cell scaffolds) and advanced research methods allowed objectives and the tasks of the project to be successfully completed. Its results were presented at international scientific congresses and conferences, and published in JCR-listed journals. Another tangible outcome of the project is the doctoral dissertation by Dr inż. Joanna Karbowniczek entitled "Microstructure, cellular response and selected properties of titanium based biomaterials applied in regenerative medicine of bone tissue and joints” (currently in its final elaboration).

Funded within the framework of the HARMONIA 3 programme, the project served as an excellent platform to establish new or deepen already existing international research co-operation. It was conducted in co-operation with Professor F. Rustichelli from Università Politecnica delle Marche (Ancona, Italy), Professor Aldo R. Boccaccini from Friedrich-Alexander-Universität Erlangen-Nürnberg (Erlangen, Germany), and Professor E. Amler from the Institute of Experimental Medicine of the Czech Academy of Sciences (Prague, Czech Republic), as well as Professor H. Cimenoglu from the Istanbul Technical University (Istanbul, Turkey). An important factor that contributed to the successful accomplishment of project objectives was the vast research experience of project partners and the opportunity to use equipment available at foreign research institutions. The international experience gained by our research team made it possible to finally open a new Biomaterials Laboratory, which expanded the research and teaching offer of the Microscopy Centre and the Faculty of Metals Engineering and Industrial Computer Science of the AGH University of Science and Technology. 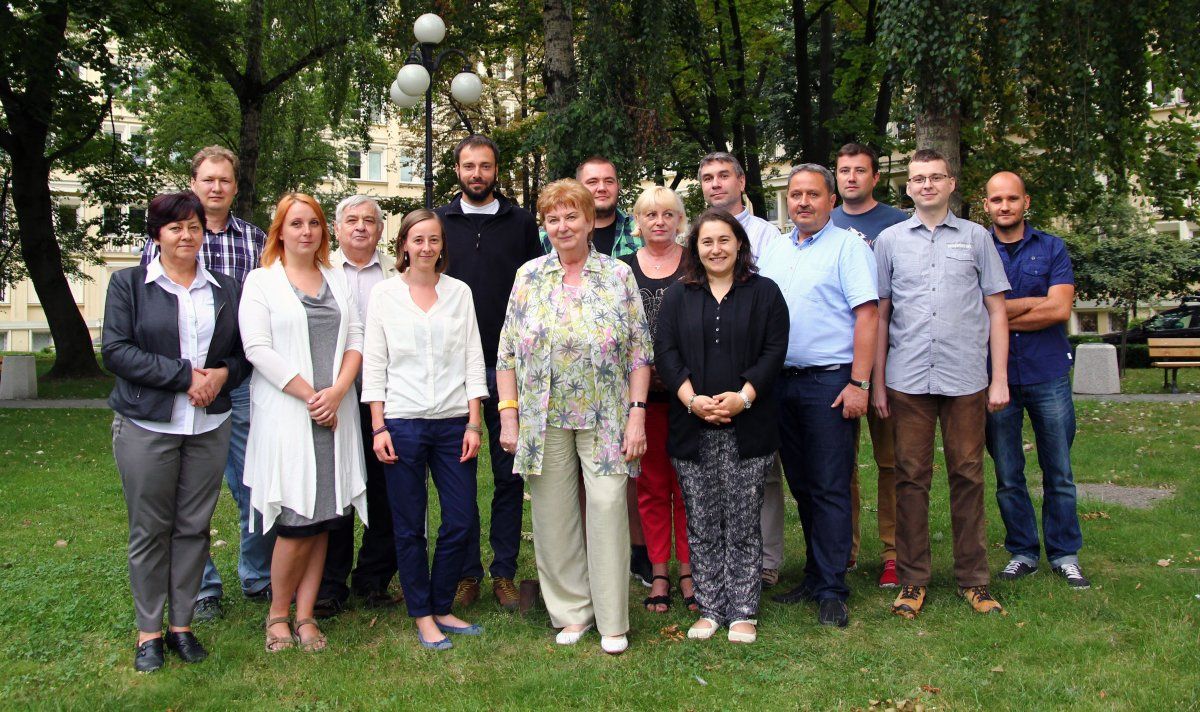 Team of International Centre of Electron Microscopy for Materials Science during the project OPTYMED realisation (photo by Stanisław Malik, 2015)

She has published over 500 scientific papers and peer-review conference articles, 4 monographs and 16 chapters. She participated in more than 150 projects as a coordinator or principal investigator. She has won grants from the State Committee for Scientific Research, the National Science Centre, the National Centre for Research and Development, EU FP6 and FP7 as well as EIT KIC InnoEnergy. Within the framework of the Operational Programme–Innovative Economy (POIG, 2007-2013), she coordinated a project entitled "Purchasing an analytical transmission electron microscope with unique equipment for research of materials' micro- and nanostructure", which allowed the AGH-UST to be equipped with a next-generation transmission electron microscope (S)TEM FEI Titan Cubed 60-300 with the top-end ChemiSTEM system for materials' analyses down to an atomic scale (resolution: 70 pm).

For many years, she has been incredibly active in her efforts for internalization Polish science. On her initiative, 15 PhD students and researchers have completed long-term research internships (mainly in Germany, Austria, and Switzerland). She has acted in more than 40 congress programme committees and often chaired sessions during global and European congresses on electron microscopy and materials science. She has initiated and headed 10 European Schools on electron microscopy regularly organized at the AGH University of Science and Technology since 2003.

She has held several foreign fellowships, including eight-year (at total) scientific stay at Forschungszentrum Jülich (FZJ), Germany. After returning to Poland, she modernized the electron microscopy laboratory at the AGH-UST and significantly developed international co-operation, which allowed the International Centre of Electron Microscopy for Materials Science to be opened, which she headed up until 2016. The Centre was invited to join the prestigious electron microscopy network, Distributed European Infrastructure for Advanced Electron Microscopy for Nanoscience.

She has also held important functions in various European organizations, such as the Board of the European Microscopy Society (until 2016), the Scientific Committee of ArcelorMittal (until 2013), the Executive Committee of the Federation of European Materials Societies, FEMS (until 2009), several Managing Committees of European projects (FP6-NoEs, COST Actions, FP7-INFRA, EIT KIC) and the Helmholtz Management Academy in Berlin. She has been a member of many national organizations, including the Materials Science Committee of the Polish Academy of Sciences (until 2014), and headed the National Committee for Cooperation with IFSEM and the National Committee for Cooperation with ICSU at the Polish Academy of Sciences (until 2010). She is a member of several European science associations (DGE and DGM in Germany and the Royal Microscopy Society, UK), a founding member of the Polish Society of Materials Science, as well as initiator and first president of the Polish Society of Microscopy (until 2014).

She has received e.g. the Gold Cross of Merit of the Republic of Poland, the award of the Minister of Higher Education and Technology, the Medal of National Education and several awards of the Rector of AGH-UST for research and teaching, including the 1st prize for career overall achievement (2016). She was awarded with Pratt Whitney Award for Outstanding Effort in Supporting the GMS Program (USA, 2009) and the Helmholtz International Fellow Award for scientific achievements (Germany, 2013).

Graduated in biotechnology from the University of Agriculture in Kraków and completed a PhD programme at the Faculty of Metals Engineering and Industrial Computer Science of the AGH University of Science and Technology in Kraków. She defended her PhD dissertation entitled "Microstructure, cellular response and selected properties of titanium based biomaterials applied in regenerative medicine of bone tissue and joints" under the supervision of Prof. Dr Aleksandra Czyrska-Filemonowicz. Between 2013 and 2017, she completed 5 foreign research internships, e.g. joining Professor A.R. Boccaccini's team at the Institute of Biomaterials (Erlangen, Germany). Since 2015, she has been employed as teaching assistant at the Faculty of Metals Engineering and Industrial Computer Science. Her main scientific interest are within biomaterials field including metallic implant materials and polymer scaffolds used in tissue engineering applications. 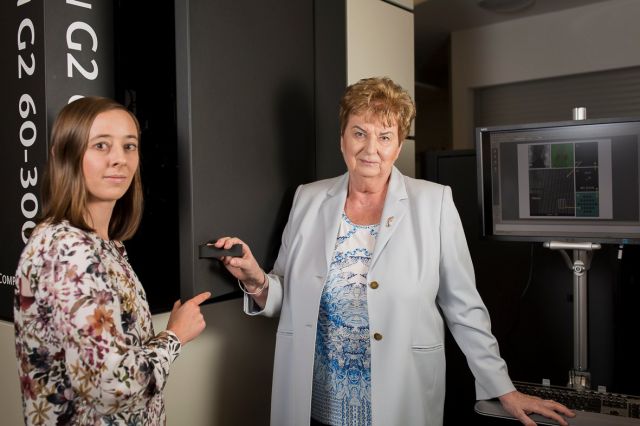