Among the projects carried out within the framework of NCN calls, those dealing with ecology and the natural environment are particularly topical. One such project will be implemented by Dr Maciej Liro from the Institute of Environmental Protection of the Polish Academy of Sciences, who will analyse the pollution of Carpathian mountain rivers with macroplastics.

Caring for the environment

The Carpathians have always stunned visitors with their beauty and nature, which is why it may come as a surprise that the amount of plastic waste in their rivers is on the rise. These changes have not escaped the notice of Dr Liro, who spent ten years doing other research in the region. “I collected data on morphology, hydrodynamics, and vegetation along several river sections. With every passing year, I got more and more alarmed by riverine litter. I began to notice certain regularities”, he recollects. He observed, for instance, that a much greater amount of plastic waste could be found in riverine areas that had thick tree cover. He began to leaf through the literature on the subject in search of more information. It turned out, however, that the publications he was looking for were rather few and far between, and hardly any were devoted specifically to mountain rivers. 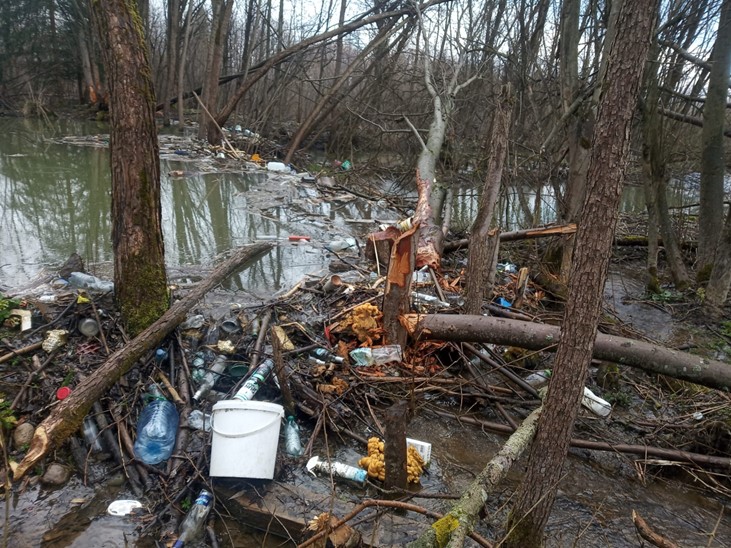 Litter piled up on a beaver dam. Czarny Dunajec, photo by Maciej Liro

To remedy this situation, Maciej Liro decided to study the waters of the Carpathians to gauge their pollution with macroplastics (plastic pieces with a diameter of more than 5 mm) and hopefully determine the factors that promote the accumulation of plastic waste. The project will involve a thorough analysis of four rivers, each with a different level of anthropic pressure. ”Our objective is to identify the places in river valleys that suffer particularly heavy pollution with macroplastics and explain why this happens on a local and regional scale”, Liro explains. To answer these questions, the team will need to collect field data and interpret them against existing maps, flood simulations and high-resolution drone images of riparian zones. ”Our research team includes not only physical and socio-economic geographers, but also a hydrotechnical engineer and a geologist. The research we want to conduct will mostly involve the manual collection of different fragments of macroplastics deposited by river waters on sediments and vegetation in the vicinity of the river bed”, he adds.

Research thus far has focused primarily on microplastics (pieces with a diameter of less than 5 mm) and their accumulation in seas and oceans. The results of this project will furnish the first data on the level of macroplastic waste pollution in the mountain rivers of the Carpathians and allow a comparison with rivers in other parts of the world.

The study may also have a practical dimension: “As part of the project, we want to map the places along the river bed where plastic waste is most frequently retained, so that we can remove it more efficiently. We want to do this on a local scale, e.g. by identifying the river formations that suffer the heaviest pollution, but also on a regional level, by showing, for instance, which part of the catchment basin receives the greatest amount of plastic waste. This information may be very useful when we decide which areas to clean up or where to install waste removal infrastructure”, explains the researcher. If the project reveals any interrelationships of this kind, we will be able to predict where the macroplastics are likely to accumulate in the future and where they are likely be transported further down the river.

June 5 marks World Environment Day, established on 1972 by the UN General Assembly. It is one of the oldest and the most important celebrations designed to raise ecological awareness and increase involvement in environmental protection.

In this context, we would all do well to ask ourselves what each of us can do to revive our planet. Maciej Liro suggests one idea: ”It is crucial that we understand we have a problem and realize its scale. Plastics have been dumped into rivers for around seventy years now and have already accumulated in really large quantities in river sediments and waters. A plastic bottle dropped into a mountain stream in the Tatras, after many years, may break down into microplastics, flow downstream, and end up in a glass of water that someone drinks in Warsaw.” This is why it is so important to continue raising public awareness about environmental pollution and reach out with the results of scientific research to local communities and tourists in a way that is clear and accessible. “I trust that our project will allow us to get to the root of the problem and come up with real solutions for plastic waste management that can be employed by local communities living in the proximity of rivers, as well as to raise the ecological awareness of our society at large”, Liro emphasizes. What each of us does today may also have an impact on whether the areas with attractive natural features, such as the Carpathians, will still give joy to future generations.

Maciej Liro’s project is entitled “Macroplastic storage in mountain and foothill rivers” and was awarded 347,761 PLN in funding.

The purpose of NCN’s SONATA programme is to support researchers at the outset of their careers in conducting innovative basic research with the use of modern research equipment or original methodology. It is targeted at researchers who earned their PhD degree 2 to 7 years prior to the submission of the proposal. The applicant must be able to demonstrate at least one work that has been published or accepted for publication.

SONATA 16 attracted 1123 proposals to the total amount of more than 891 million PLN. In the end, 180 projects were selected to receive nearly 161 million PLN in funding. It is only possible to serve as a principal investigator in a SONATA project once.