On 6 October 2021 Prof. Jakub Growiec, Prof. Wojciech Fendler and Dr hab. Michał Tomza will receive the 2020 NCN Award and the of the 2021 NCN Award will be announced.

The Award of the National Science Centre is a distinction for young researchers, awarded for significant achievements in basic research carried out in Poland. It has been awarded since 2013 in three areas: Arts, Humanities, Social and Sciences, Life Sciences, Physical Sciences and Engineering. In 2020, the winners were Prof. Jakub Growiec, Prof. Wojciech Fendler and Dr hab. Michał Tomza, however due to the pandemic situation, the award ceremony could not have taken place. The researchers will receive their statuettes on 6 October at the Gallery of 19th Century Polish Art at Sukiennice. On the same day, the winners of the 2021 NCN Award will also be announced. The event will begin at 6pm and will be streamed online.

Prof. Jakub Growiec of the Warsaw School of Economics is the author of advanced research on economic growth, particularly considering the role played in it by technological progress and human capital. “Despite the turmoil of the pandemic, I have tried to maintain my usual work rhythm over the past year. I have managed to publish three scientific articles in international journals and have started another NCN grant in which I am one of the main investigators”, says the researcher. His articles included a theoretical analysis of the phenomenon of the transition from partial to full automation of production processes, which may revolutionise the world economy in the future. He also co-authored an article estimating the contribution of immigration from Ukraine to economic growth in Poland in recent years. 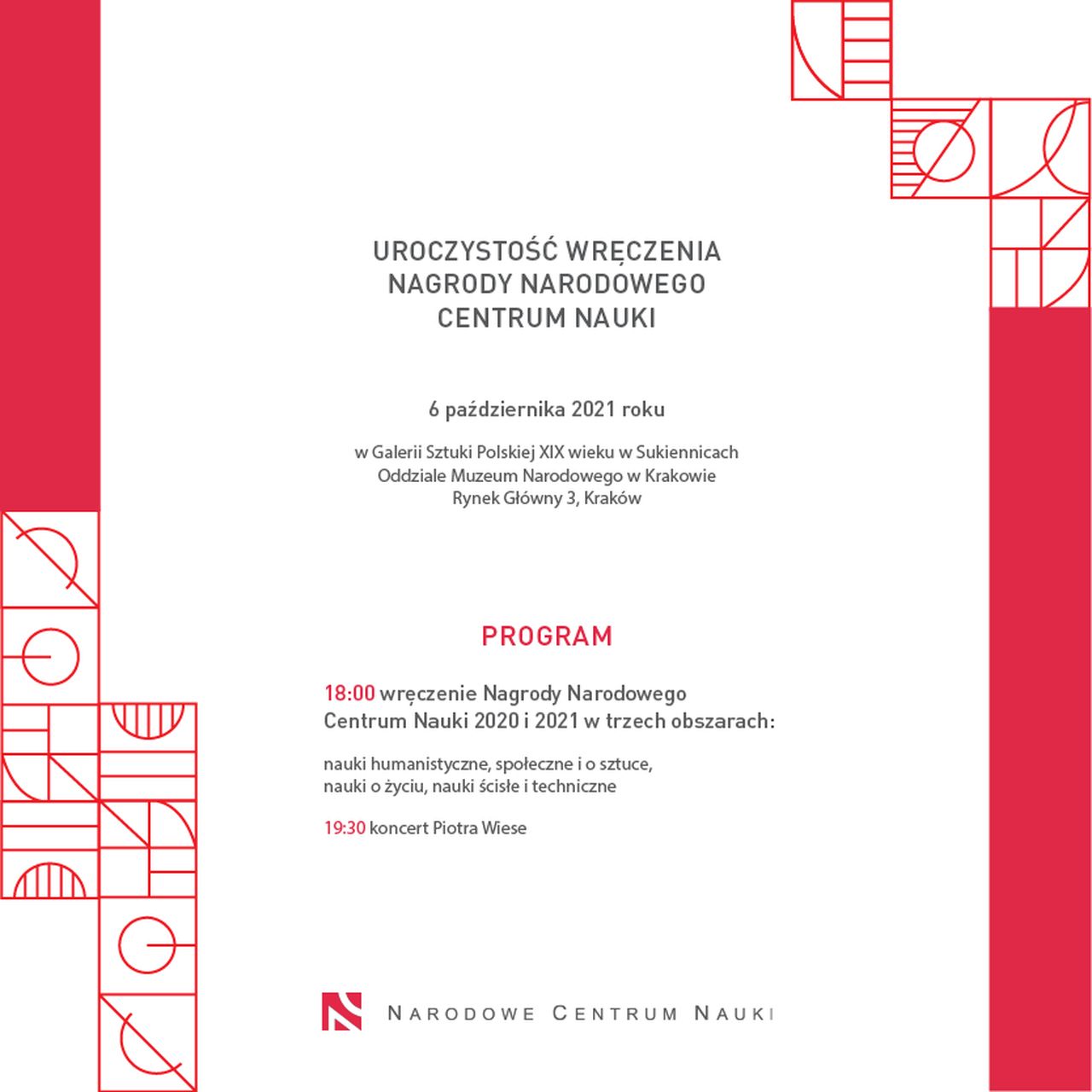 Prof. Wojciech Fendler from the Medical University of Lodz was awarded last year for his significant results in research on microRNAs as biomarkers of accidental exposure to ionising radiation and complications of radiotherapy. In his study, he showed that specific microRNA molecules identifiable in serum were indicative of irreversible damage to the bone marrow by ionising radiation. As the researcher points out, the constraints of the pandemic and the transfer of classes to the internet have limited scientific opportunities. “Most of our activities take place in front of a computer screen, but interactions with other team members are very important. However, we were able to finalise a project on predicting prognosis in bladder cancer and complications of radiotherapy in head and neck cancers. I believe that the most interesting thing is yet to come and by the end of 2021 we will have something to boast about again”, he says.

Dr hab. Michał Tomza from the University of Warsaw was recognised in 2020 for his theoretical description of the interactions between ultracold atoms, ions and molecules. “The award has motivated me to continue to work hard and develop my research group. Continuing the theme for which I was awarded, I managed to go one step further and together with my students and an experimental group, this time from Freiburg, we realised for the first time the quantum control of ultra-cold collisions between a single ion and atoms using a magnetic field”, explains the award winner.

The profiles of the winners and video footage of them were presented in the 2020 text.

The NCN Award is PLN 50,000. Laureates are selected by the Chapter, which includes the Director and members of the NCN Council and representatives of the funders. Last year, the award in Physical Sciences and Engineering was sponsored by KGHM Polska Miedź Foundation, in Life Sciences by Adamed Pharma S.A., whiles INGLOT Sp. z.o.o. co-sponsored the award in Arts, Humanities and Social Sciences.

The agenda of the event in the Sukiennice will include speeches by six prize-winners and a concert by Piotr Wiese.

The media patronage over the event was taken by Science in Poland, PAP and the Academic Forum.

Previous winners of the NCN Award.