Record-breaking editions of OPUS and PRELUDIUM

Over 900 grants will be awarded to researchers from all over Poland in NCN-funded research projects in the area of Arts, Humanities and Social Sciences. We have not had that many winners in the OPUS and PRLUDIUM calls for years!

"We were able to award more grants because the Ministry of Education and Science significantly increased their funding of the NCN. The quality of proposals submitted to the calls is usually very high and we often regret that we have to reject projects which, in our opinion and in the opinion of our experts, mainly international ones, should be funded" says Zbigniew Błocki, Director of the National Science Centre. A total of almost 559 million PLN will be awarded for research projects submitted under the OPUS call and over 77 million PLN under the PRELUDIUM call. 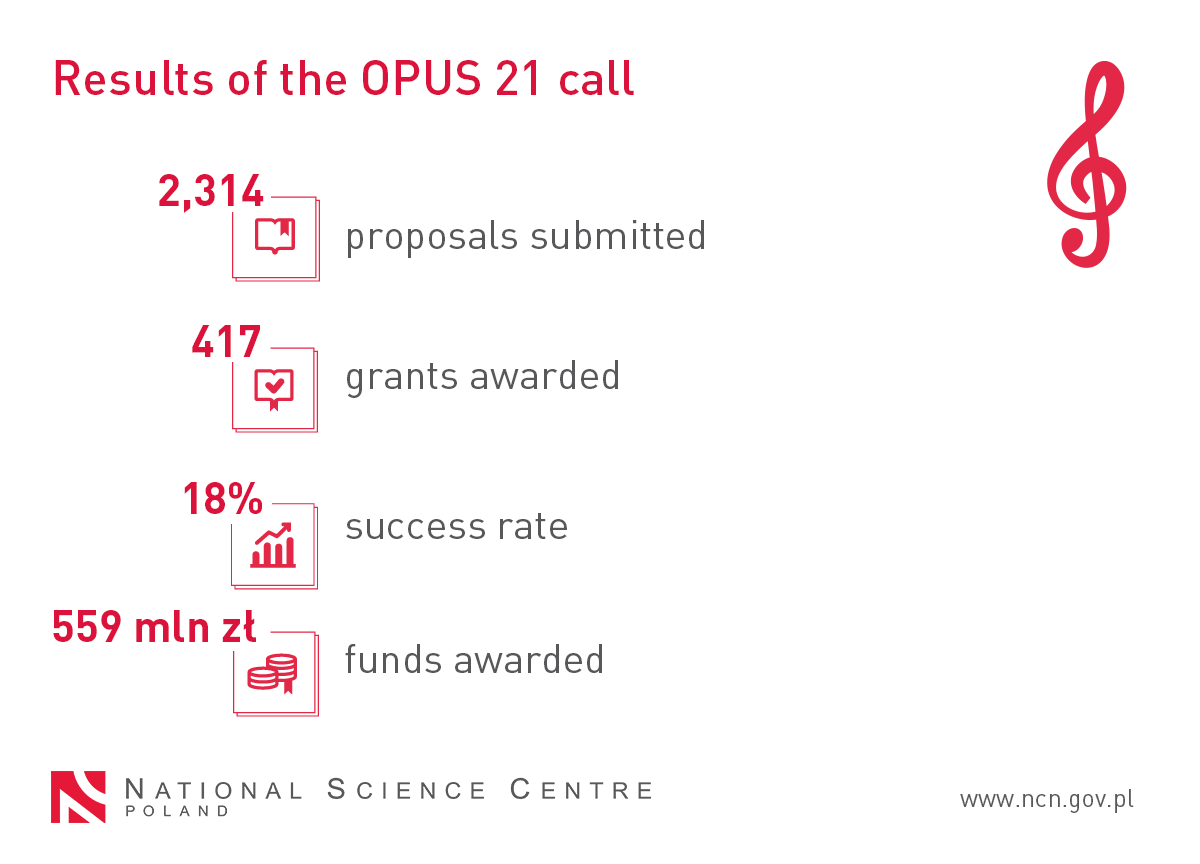 Researchers submitted a total number of 4531 proposals to the two calls. The NCN coordinators and experts recommended 912 projects for funding following the eligibility check and merit-based evaluation of proposals. The last time the National Science Centre awarded a similar number of grants under the OPUS call was in 2017 and in the case of PRELUDIUM, more researchers were only awarded funding in the first edition of the call ten years ago.

The OPUS call is addressed at researchers at any stage of their research careers. Principal investigators must have at least one research paper published or accepted for publication in their research track or, in the case of research in art, at least one artistic achievement or achievement in research in art. Principal investigators are not required to be PhD holders. Funding awarded under the call may be designated for research projects carried out by a research team affiliated with, for example, a university, research institute of the Polish Academy of Sciences, research library or scientific and industrial centre, including a research project involving large-scale international research infrastructure or carried out in cooperation with foreign partners.

Under PRELUDIUM, the principal investigator must not be a PhD holder (and does not even have to be a PhD student) and the project may (but does not have to) be related to the subject of the doctoral dissertation. The research team must not comprise of more than 3 members, including the principal investigator and mentor. “The NCN allows young researchers to be more independent in their efforts to seek funding of their research. We are the only grant agency (or perhaps one of very few grant agencies in the world) to provide funding directly to PhD holders (under PRELUDIUM). This is an expression of great confidence in young researchers who are just starting their research careers and a chance for them to spread their wings” says Professor Jacek Kuźnicki, President of the NCN Council.

From travel literature to space exploration

The scope of research that has been awarded funding is very wide. Projects will cover all academic disciplines or groups of disciplines of Arts, Humanities and Social Sciences, Physical Sciences and Engineering, and Life Sciences. Under the OPUS call, funding will be awarded for research projects concerning, e.g., medieval Japanese travel literature by Dr Adam Bednarczyk from the Nicolaus Copernicus University in Toruń, the impact of demographic changes on the electoral market by Dr hab. Agnieszka Turska-Kawa from the University of Silesia in Katowice, bioethics of space exploration by Dr Konrad Szocik from the University of Information Technology and Management in Rzeszów and universal vaccine against SARS-CoV-2 variants based on conserved epitopes of spike protein by Dr Katarzyna Grzyb from the University of Gdansk. 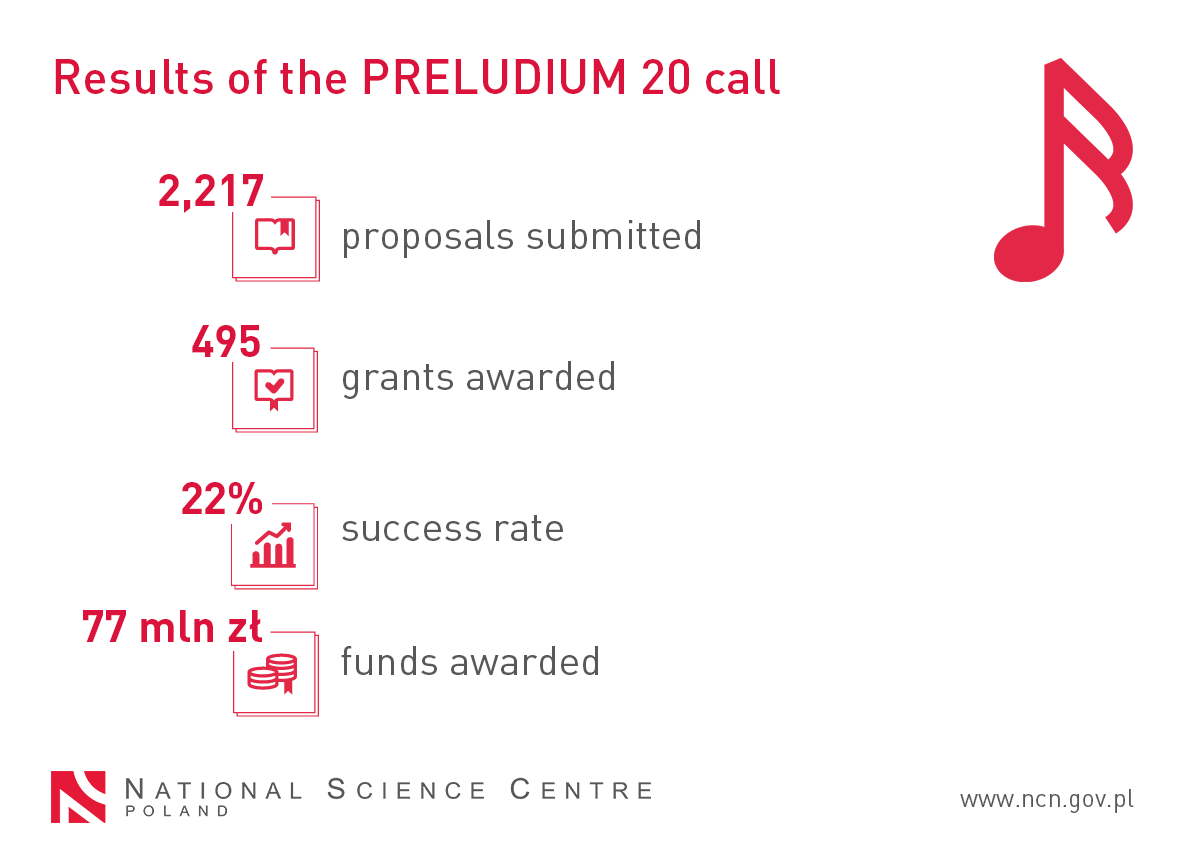 The winners of the PRELUDIUM call will research, inter alia, the effects of high pressure treatment on expression of antimicrobial resistance(Urszula Zarzecka from the University of Warmia and Mazury in Olsztyn), agent-based modelling of diffusion of electric vehicles among households interested in applying photovoltaic microsystems (Karolina Bienias from the Wrocław University of Science and Technology) and links between algebraic, modal and multiple valued quantum logic (Elżbieta Drozdowska from the John Paul II Catholic University of Lublin).

"Our grant awarding system is merit-based. NCN officers and members of the Council are always happy to talk to the representatives of science and guide them to increase their chances for success in the future calls", says Professor Kuźnicki.
The majority of grants went to the researchers from the largest academic and research centres, i.e. Warsaw, Krakow, Poznań, Wrocław and Gdańsk. A large portion of funding was also awarded to researchers from Katowice, Toruń and Łódź. Furthermore, the ranking lists include projects that will be carried out by researchers from all over Poland.

A list of all OPUS and PRELUDIUM proposals in PDF format.