Accumulation of atmospheric contaminants in cryoconites localized in polar regions

Despite being far from major civilization centres the Arctic environment is heavily influenced by human activities. One of substances that polute the Arctic are heavy metals, including radioactive elements, distributed globally through the atmospheric circulation. A better understanding of levels and factors influencing spreading of radionuclides between different compartments of the Arctic environment is necessary because these ecosystems are vulnerable to any environmental disturbances. This knowledge is still limited due to poor accessibility and difficult work conditions in the Arctic. An important component of the Arctic environment are glaciers, which, for example, on the Svalbard archipelago cover 60% of its surface area.

Photo by Michał Łepecki A characteristic feature of polar glaciers are cryoconites – accumulations of dust deposited on glacier surfaces. Being darker than ice the cryoconites melt down into glacier ice creating cryoconite holes filled with water in summer. Cryoconite constitute a basis for various organisms whose properties and importance for biogeochemical cycling in the Arctic environment are subject to intensive research. Only recently their ability to accumulate radionuclide has been recognized. This ability is related to the highly adsorbing extracellular polymeric substances and other substances excreted by cyanobacteria – the most common living components of cryoconites. The role of these substances is to bind toxic elements outside cyanobacteria cells. The cryoconite aggregates held together by these substances can survive even tens of years on glacier surfaces acquiring during that time airborne radionuclides up to very high levels. These radionuclides were released into the atmosphere by nuclear weapons testing (which culminated in years 1963-4), nuclear accidents (Chernobyl, Fukushima), emissions from spent nuclear fuel processing plants or from less known disasters of nuclear powered satellites. Among these radionuclides are: Pu isotopes, Cs-134,137, Am-241 and Sr-90. Besides these radionuclides released into the atmosphere by man cryoconites accumulate naturally occurring 210Pb and 210Po. Radionuclide concentrations observed in cryoconites reach very high values, comparable to those known from sites of nuclear accidents. Therefore, the cryoconites are important component of the radiation environment of the Arctic. Until they remain on glacier surfaces cryoconites do not constitute a threat to fragile Arctic ecosystems but the well documented retreat of Arctic glaciers results in deposition of cryoconites on glacier forefields. The enriched in radionuclides cryoconite material can be mobilized by wind and surface runoff of water or assimilated by plants colonizing the uncovered areas. The retreat of glacier may thus lead to spreading of these radionuclides in the terrestrial and marine ecosystems. 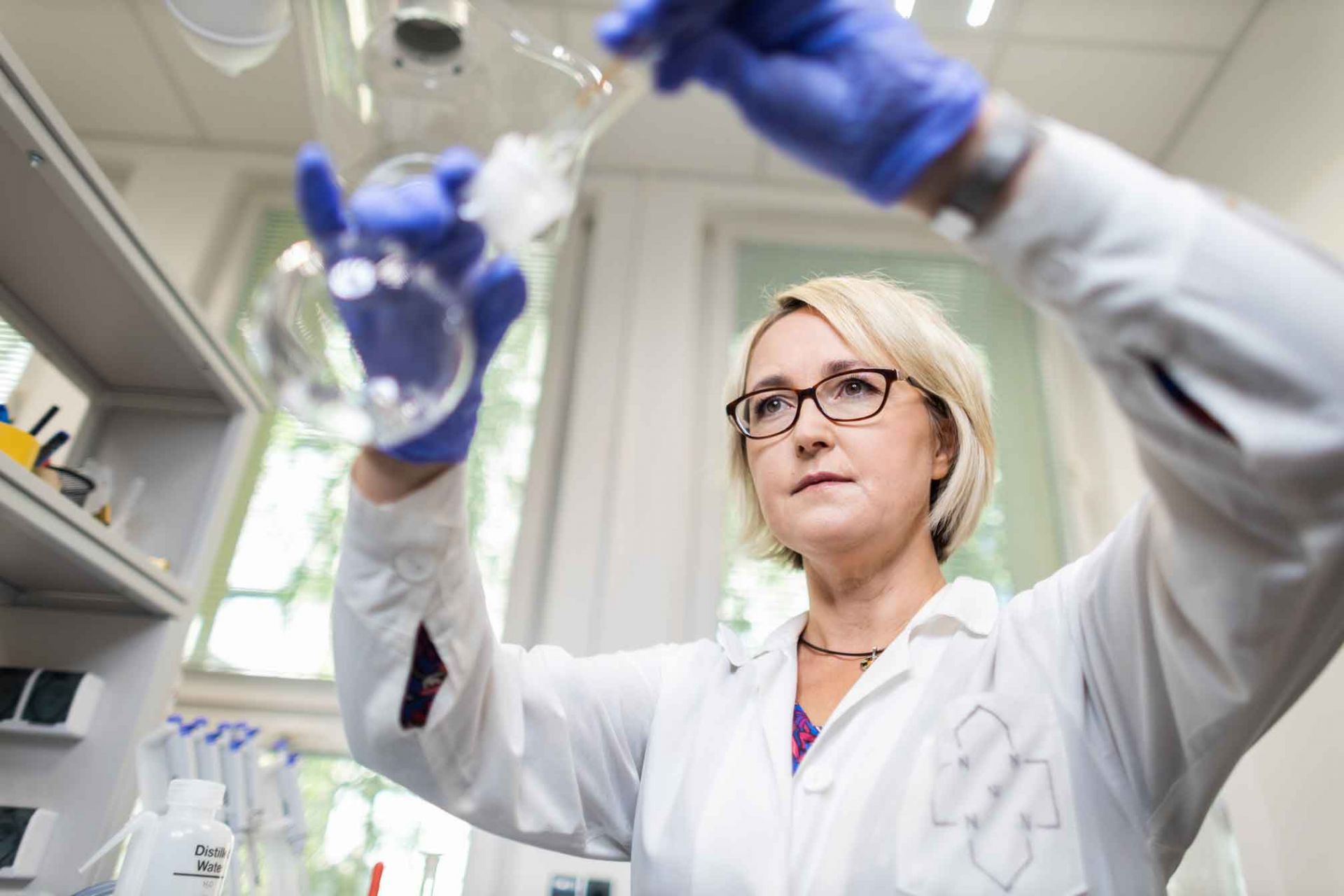 Photo by Michał Łepecki The project aims at determination of radionuclide levels in cryoconites collected from selected glaciers on Spitsbergen and Greenland and at identification of their variations along the glaciers. The cryoconites collected from the frontal parts of glaciers should contain more radionuclides. The presumed relationship between chemical composition (mineral vs organic components) and the ability of cryoconites to accumulate radionuclides will be verified. Additionally, it will be checked if invertebrate organisms are absent from cryoconites with highest radionuclide levels due to exposition to high doses of ionizing radiation.

Project results will increase the knowledge on the completely unknown aspect of cryoconite occurrence in the environment which is their ability to concentrate radionucklides. This knowledge is important to fully understand the fate of these substances in the environment in the conditions of current climate change. Our team’s results have been published in renowned scientific journals and presented at international conferences, which has allowed us to establish a strong presence among the top researchers working on the issues of glacier contamination across the globe.

Despite its remote location, away from the main centres of civilization, the Arctic still bears the full brunt of the negative consequences of human activities, including contamination with heavy metals, such as radioactive elements, which spread all over the globe via atmospheric circulation. Considering the great susceptibility of Arctic ecosystems to all disturbances, it is of paramount importance that we learn more about the presence of radioactive elements, their concentration levels and the factors that affect their spread across the local environment. Because the Arctic is not easily accessible and field work conditions on the ground are hard, our knowledge is still incomplete. An important element of the Arctic environment is its glaciers, which, in some regions, such as the Svalbard archipelago, cover as much as c. 60% of the surface.

Among the many characteristic features of polar glaciers are cryoconites, i.e. accumulations of dust deposited on the glacier surface. Their dark colouring makes them absorb solar radiation much faster than ice; they quickly heat up and melt into its surface, creating characteristic holes that fill up with water in the summer months. Cryoconites may accommodate numerous organisms, whose features and role in the circulation of matter in the Arctic are being intensively studied today. It was not until recently that researchers first observed the specific ability of cryoconites to accumulate radioactive elements, which has to do with the metal-adsorbent properties of polymer substances secreted by cyanobacteria, their most abundant inhabitants. The role of these viscose substances, which keep cryoconites together, is to bind toxic elements outside the cells of cyanobacteria. As a result, cryoconites acquire the mechanical cohesion that allows them to persist on the surface of the glacier for many years; this, in turn, results in extremely high concentrations of radioactive elements, which have been released into the atmosphere through nuclear explosions (with a peak occurring in 1963-64), nuclear disasters (Chernobyl, Fukushima), nuclear fuel processing plant emissions, or lesser known nuclear-powered satellite failures. These radionuclides include Pu, Cs-137, Am-241 and Sr-90 isotopes. Apart from the isotopes released by human activity, cryoconites also accumulate naturally occurring isotopes, such as Pb-210. These radionuclide concentrations may reach incredibly high levels, comparable to those recorded in highly contaminated areas close to nuclear disaster sites. As such, cryoconites represent an important component of the Arctic radiation environment. As long as they remain trapped on the surface of glaciers, they do not enter local food ecosystems; however, as the glaciers retreat, cryoconite material is gradually deposited in the glacier foreland, as documented in earlier papers. This radionuclide-rich material may then be transported by wind and water and assimilated by plants that emerge over time on areas exposed by the glaciers. Retreating glaciers may thus cause these radionuclides to spread throughout land and marine ecosystems.

The main purpose of the project was to assess the concentrations of selected radionuclides (137Cs, 238,239+240Pu, 241Am, 210Pb) in cryoconites collected from several Spitsbergen and Greenland glaciers, as well as to study their variability along the glaciers. We also looked for the sources of contamination with artificial radionuclides by measuring isotope ratio values, as well as the relationships that hold between the chemical composition of cryoconites (their mineral and organic content) and their ability to accumulate radionuclides.

The results of the project expanded our knowledge into an almost completely unexplored aspect of cryoconites, i.e. their ability to concentrate considerable quantities of atmospheric pollutants, which may have important consequences for the environmental circulation of these substances in the context of climate change and the retreat of Arctic glaciers.

Graduate of the Faculty of Geology, Geophysics and Environmental Protection of the Cracow University of Science and Technology where she was awarded a PhD in earth science. Since 2007, she has been affiliated with the H. Niewodniczański Institute of Nuclear Physics of the Polish Academy of Sciences, , and later, in 2018, the title of habilitated doctor in physical science. She is the head of the Department of Mass Spectrometry of the Polish Academy of Sciences and boasts an impressive research record as an active participant in academic conferences and a winner of numerous grants. During her polar expeditions, she collected samples of soil and cryoconites, which she then tested for radionuclide and heavy metal concentration levels. She has built an extensive database of data from the glaciated areas of the northern and the southern hemisphere, establishing activity concentrations for 137Cs, 238,239+240Pu, 241Am, 210Pb and determining the source of contamination via isotope ratio values. Since 2014, she has been a member of an expert group studying radioactivity in the Arctic, AMAP (Arctic Monitoring Assessment Programme). She also sits on the Quaternary Research Committee of the Polish Academy of Sciences and the Association of Polish Geomorphologists. 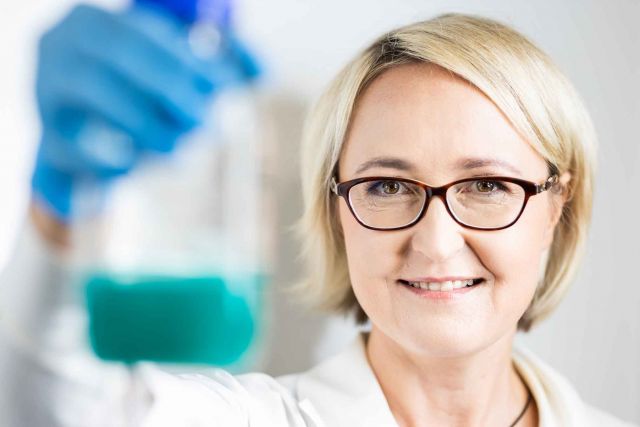