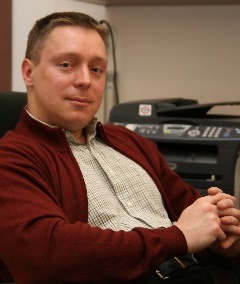 Robert Hasterok graduated in 1994 from the Faculty of Biology and Environmental Protection at the University of Silesia in Katowice. In 1999, he was awarded a PhD in biological sciences from the University of Silesia in Katowice, under the supervision of Professor Jolanta Maluszynska. He completed post-doc fellowships at Aberystwyth University, UK (1999–2005) and the Swedish University of Agricultural Sciences in Alnarp (2002–2004). In 2006, he was awarded habilitation (equivalent of DSc) and was promoted to professor in 2012. He has made numerous research and teaching visits to universities and research institutes in the UK, Sweden, Spain, Germany, Czech Republic, Hungary, Latvia, Russia, Ukraine, Turkey, China, Japan and Australia. He was Head of the Department of Plant Anatomy and Cytology, Faculty of Biology and Environmental Protection (2010–2019) and, since 2020, leader of the Plant Cytogenetics and Molecular Biology Group of the Institute of Biology, Biotechnology and Environmental Protection, Faculty of Natural Sciences at the University of Silesia in Katowice.

His research interests focus on plant molecular cytogenetics. He is an expert in using fluorescence in situ hybridisation techniques to study plant genomes. Under international collaboration, he initiated and developed complex analyses of plant nuclear genome organisation at the microscopic level using model grasses of the Brachypodium genus. Together with his team, he discovered, inter alia, that various cytotypes of the model grass B. distachyon are in fact three distinct species. He also described selective suppression of the activity of 35S rRNA genes in B. hybridum and proposed a comprehensive model of karyotype evolution in this genus. He participated in international projects to sequence B. distachyon and B. hybridum genomes, completed in 2010 and 2020, respectively.

He is a member of many organisations and societies in Poland and abroad, such as the International Brachypodium Initiative (one of the founding members in 2006), the Committee on Cell Biology, Division II: Biological and Agricultural Sciences of the Polish Academy of Sciences (2012–2015), the Scientific Council of the Institute of Plant Genetics of the Polish Academy of Sciences (since 2015), the Committee of Developmental Biology of the Polish Academy of Arts and Sciences (since 2020), the Genetics Society of Australasia, and the Vavilov Society of Geneticists and Breeders of Ukraine. He chaired regularly expert panels at the National Science Centre Poland and was a member of an international expert panel of the European Research Area.

He was Principal Investigator in eight national research projects, funded inter alia by the National Science Centre (MAESTRO, HARMONIA, OPUS), and PI or co-PI in six international or foreign research projects funded e.g. by EPPN 2020/Horizon 2020 (European funds), the Biotechnology and Biological Sciences Research Council (UK), the Joint Genome Institute – United States Department of Energy (USA). He is co-author of more than 80 publications indexed by the Scopus database, which have been cited to date over 3300 times. He has presented several dozen lectures at international and domestic conferences. He has supervised seven successfully completed doctoral dissertations, and has been a reviewer in promotion procedures in Poland and abroad.

He is a recipient of the Barbacki National Scientific Award of the Institute of Plant Genetics of the Polish Academy of Sciences for outstanding research achievements (2001),  the Minister of Science and Higher Education Award for outstanding research achievements (2011), and the Gold Badge of Merit for the University of Silesia in Katowice (2019).

More detailed information regarding his research, teaching and administrative responsibilities can be found here: http://www.wbios.us.edu.pl/hasterok.