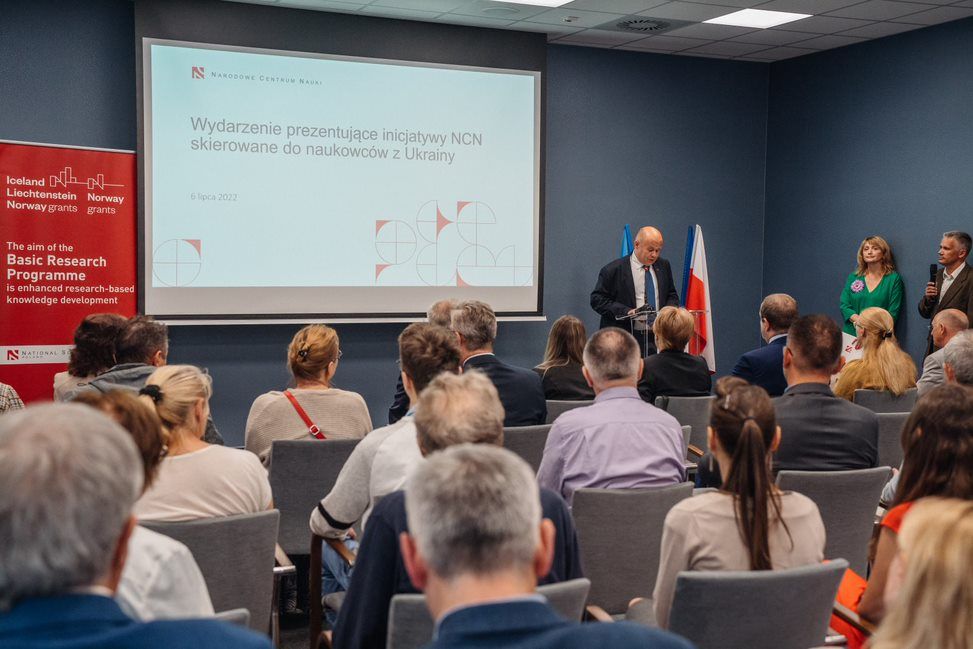 fot. Jan Bielecki dla NCN “Countries like Poland need to remember that the heroic struggle that Ukrainians are engaged in while fighting for their country is, in its essence, also a struggle for our freedom. It is our historical duty to help them in their plight”, said Professor Zbigniew Błocki, Director of the National Science Centre, during an event held to present the NCN’s initiatives targeted at Ukrainian researchers. The meeting took place on 6 July 2022 at the headquarters of the NCN.

The National Science Centre has been involved in delivering assistance to Ukrainian academics from the very start, launching a number of initiatives that have thus far allowed Polish academic and research centres to hire nearly 100 Ukrainian researchers. During the first days of the war, it drafted a special programme to enable Ukrainian researchers to continue their research in Poland, which is now commissioned by the Ministry of Science and Higher Education. We have also made it possible to hire refugee researchers under current NCN projects.

“The NCN was the first research institution to express its solidarity in the wake of the Russian aggression. We are grateful for the support we’ve already received, but also for the fact that you haven’t stopped helping us. This Polish-Ukrainian research cooperation should be continued even in difficult times, such as the ones we’re facing today”, said Dr Olga Polotska, Head of the National Research Foundation of Ukraine. 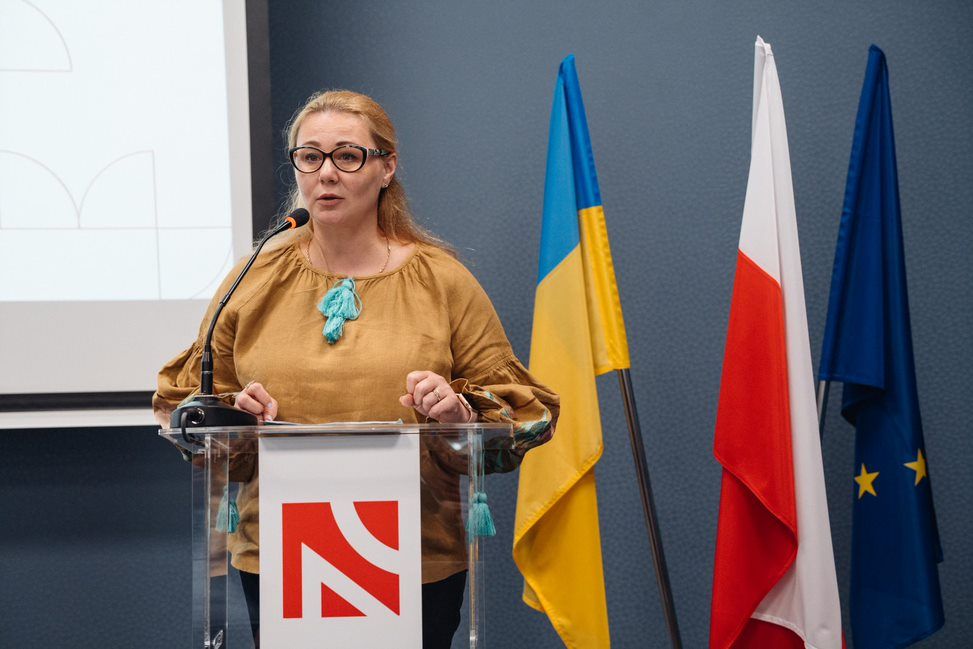 dr Olga Polotska, fot. Jan Bielecki dla NCN During the meeting in Kraków, we also announced a new programme for young Ukrainian researchers, funded under the EEA and Norway Grants.

In the coming weeks, the NCN is going to announce a scholarship programme for Ukrainian researchers without a PhD degree. These special scholarships will be paid out for 6 to 12 months; their holders can spend at least half of that time in Ukraine and carry out their grants remotely.  The scholarships will allow around 20 Ukrainian researchers to conduct  projects at Polish academic and research centres. The programme is financed from a bilateral fund of more than 250 thousand euro. 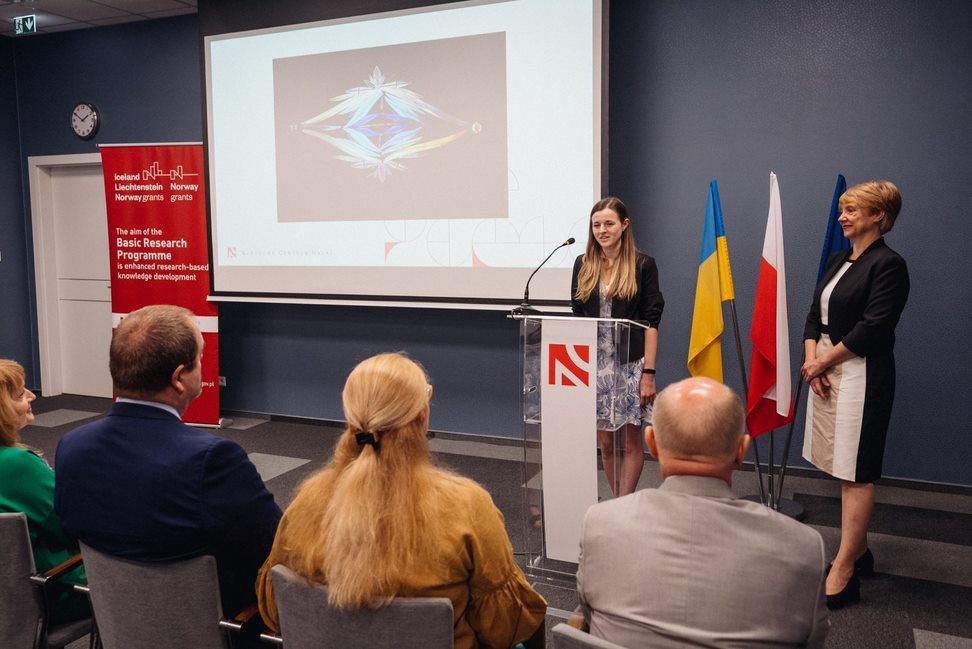 dr Olha Kryvosheia-Zakharova i jej mentorka, dr hab. Agata Wojtal, prof. IOP PAN, fot. Jan Bielecki dla NCN The NCN is also planning to continue its special programme for Ukrainian researchers with a PhD degree, commissioned by the Ministry of Science and Higher Education. In the next edition, the programme will be funded under the EEA and Norway Grants, and researchers will once again be able to spend at least half of the grant period in Ukraine.

In both programmes, applicants will need to explain how they are planning to integrate with the Polish research community and outline the benefits that their new skills and experience will bring to Ukrainian science. 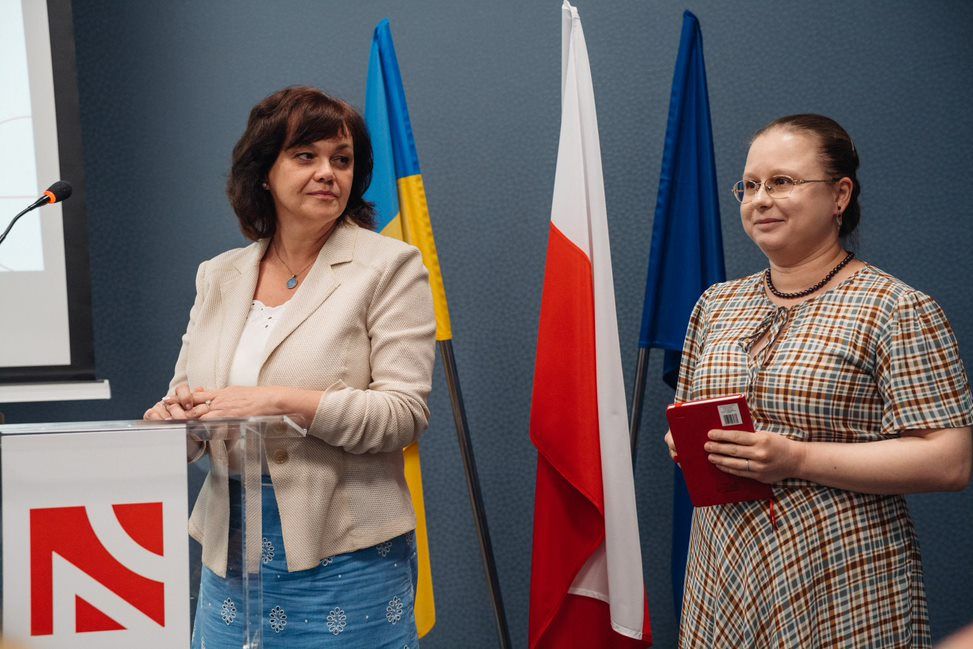 prof. Halyna Naienko i dr hab. Zofia Brzozowska z Uniwersytetu Łódzkiego, fot. Jan Bielecki dla NCN “We should adopt a broader perspective, look ahead to the future, and think of what will come after the war. Our programmes should support research in Ukraine and not aim to keep Ukrainian researchers in Poland. I really believe we can build a good future together”, said Professor Jacek Kuźnicki, President of the NCN Council, in the closing words of his statement.

During the meeting, two Ukrainian women who now work in Poland under NCN-funded grants talked about their research. Dr Olha Kryvosheia-Zakharova and her mentor, Dr hab. Agata Wojtal, professor at the Institute of Nature Conservation, PAS, presented a project on the biodiversity of selected water ecosystems in Poland. Dr hab. Zofia Brzozowska and Prof. Halyna Naienko from the University of Łódź talked about their project entitled “Linguistic differentiation of Slavia Orthodoxa at the dawn of modernity: continuity and change. A Mixed-Methods study”, conducted by an interdisciplinary team of medieval and Paleo-Slavic scholars at the Faculty of Philology in the University of Łódź.

The meeting was attended by the Consul General of Ukraine and the Honorary Consul of the Kingdom of Norway, Ukrainian NCN grant winners and their Polish mentors, representatives of academic and research institutions, as well as members of the NCN Council and NCN staff. The event was held under the auspices of the President of Poland, Andrzej Duda. 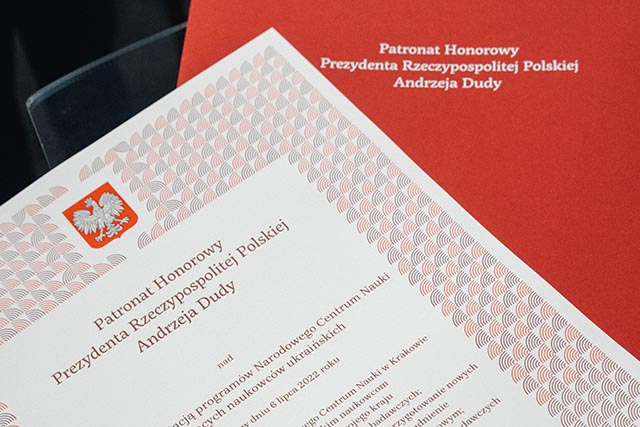 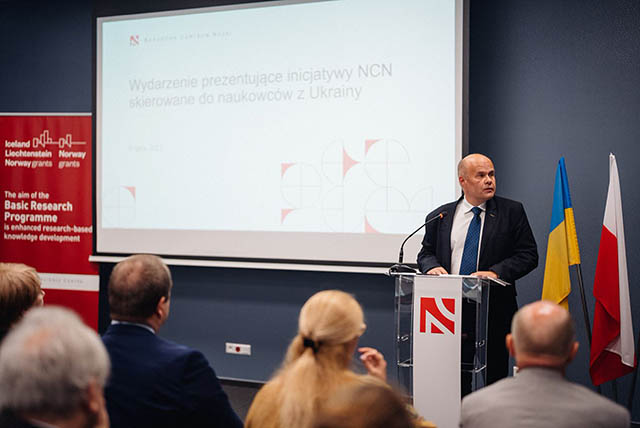 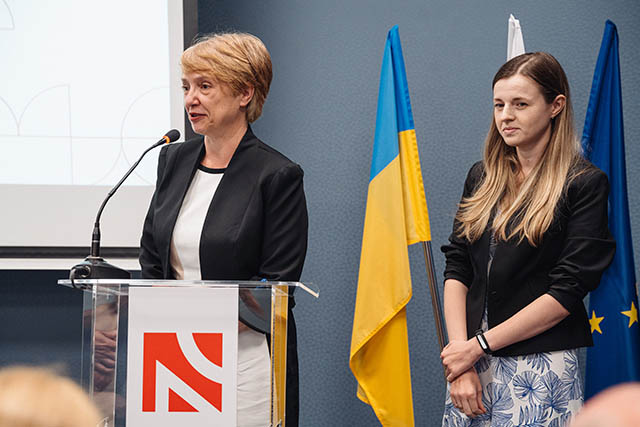 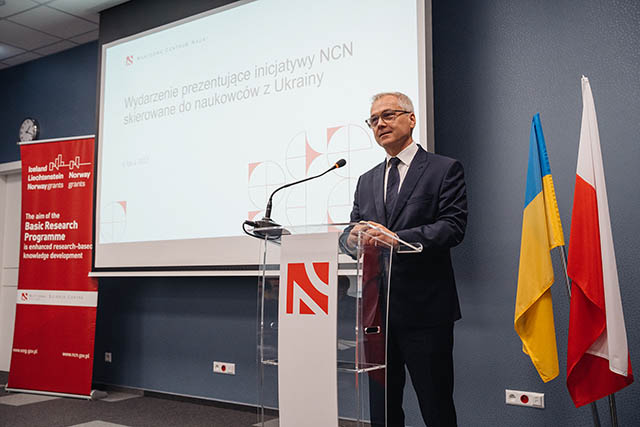 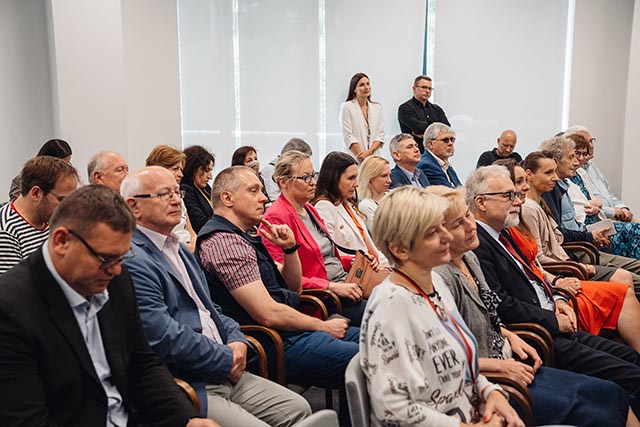 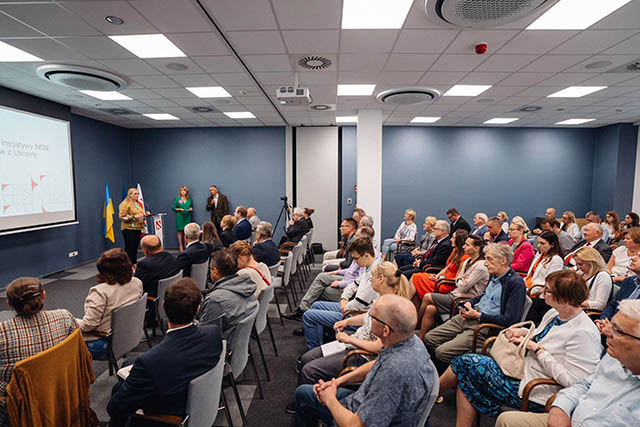 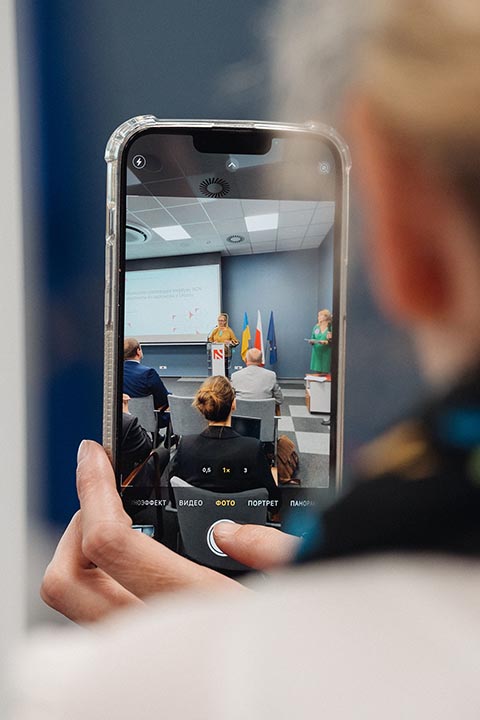 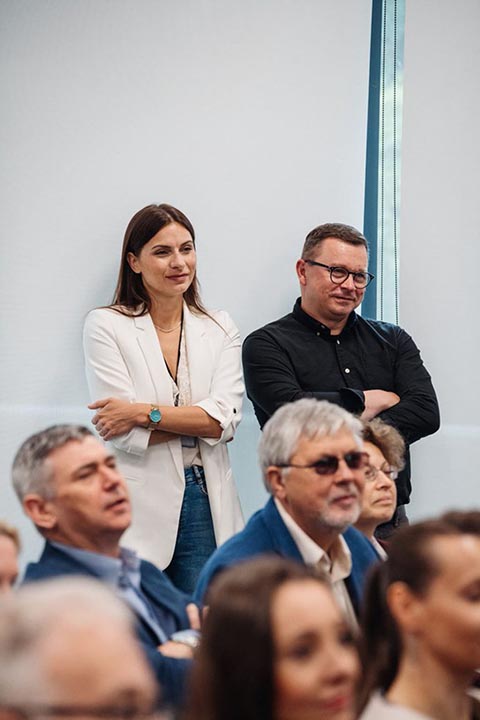 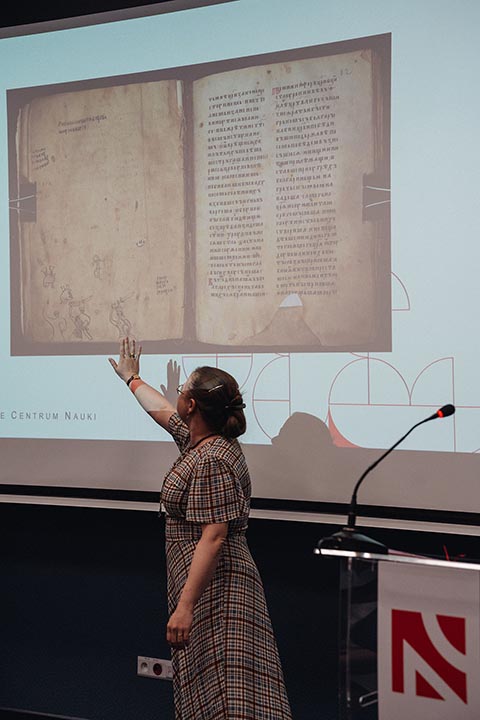 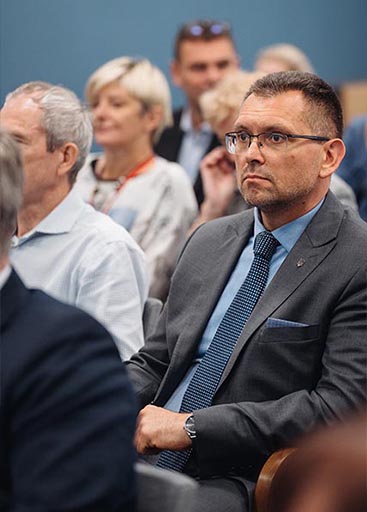 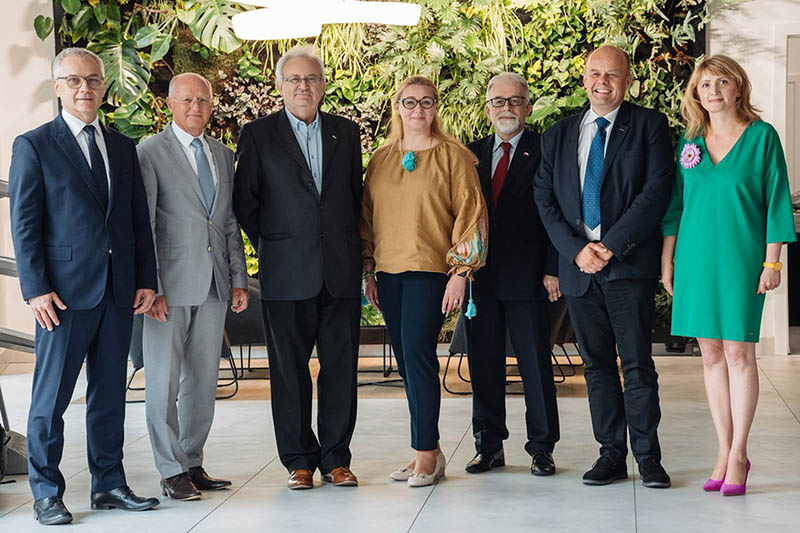 Special scheme for researchers from Ukraine